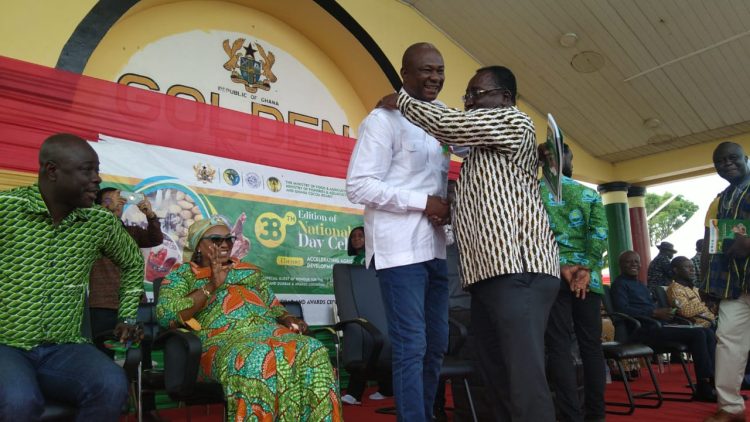 Who is the best farmer in Ghana

Stay tuned as we unveil the best farmer in Ghana – 2022

Who is the best farmer of the year

The best farmer for this year is Nana Yaw Sarpong Serebour.

Nana Yaw Sarpong Serebour has been adjudged the 2022 national best farmer at a ceremony in Koforidua, the Eastern regional capital.

The 43-year-old took home a cash prize of GHS1,000,000 and two nights’ full board complimentary stay for two at the Peduase Valley Resort.

Nana Yaw who hails from Asante Juaben with 22 years of experience in farming has several farms dotted across the Ashanti Region providing employment opportunities to several families in the areas he operates.

He takes home a tractor, trailer, ploughs, and sprayer.

The second runner-up also went to Professor Akwasi Asabre Ameyaw from Techiman North in the Bono East region. He received a tractor with other Agriculture implements.

The National best female farmer went to Yaa Adjeley from Wassa. She received a cash prize of GHS100,000 and a study tour of Ghana.

The 38th National farmers’ day celebration was under the theme “Accelerating agricultural development through value addition” and was held at the Jubilee park in Koforidua.

What are the four types of farmers?

What is the most profitable agriculture?